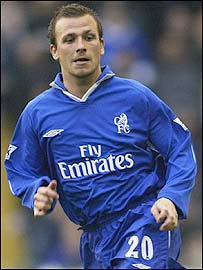 Hibs have been linked with former midfielder Jody Morris in one of today's tabloids.

According to the report Hibs boss Collins is interested in the former Chelsea, Leeds Utd, Rotherham United and Millwall midfielder and could offer him a chance to impress the Easter Road management team.

At this moment in time the player is on trial with MK Dons and is also interesting , but Hibs would surely be the most attractive option to the former English bad boy.

Morris, 28, was released by Millwall in June following a nightmare cruciate knee injury, so is available on a free.

Morris won the European Cup Winner's Cup, FA Cup and FA Charity Shield while at and would add much needed steel and experience to the Hibs midfield, after the loss of the outstanding Scott Brown to Celtic, in a deal worth Â£5.5m.

Morris was also capped at U-21 level for on a number of occasions.

What may put Collins off is the players' past bad boy image, he has been in trouble on a number of occasions, he was one of a number of players who drunkenly abused American passengers on a plane within hours of the 9/11 atrocity in . He was also accused of being in a drunken brawl in 2002 and sexually assaulting two women in 2003. Both of these charges were dropped.

He was also arrested in 2006 for driving drunkenly down the wrong way of a one way street, he was disqualified from driving for four years and given a two year suspended jail sentence.