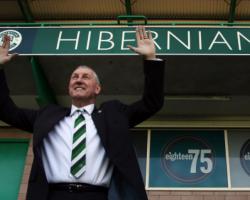 McGinn fires Dons to victoryNiall McGinn's brilliant double handed Aberdeen back the initiative in the race for the Scottish Premiership's second spot as the Dons defeated Hibernian 2-0 at Easter Road.Following three successive draws, the Reds now move three points clear of third-placed Motherwell following their Edinburgh triumph with just five games to play.And they have McGinn to thank after a talismanic display in the capital

The Northern Irishman had gone 16 games without a goal before scoring against Dundee United at the end of last month, but has now netted three times in as many games after gunning down the meek hosts.Hibernian boss Terry Butcher had been looking for a reaction after last week's humiliating derby loss to administration-hit Hearts and made three changes to his side.The midfield trio of Liam Craig, Paul Cairney and Alex Harris came in as Alan Maybury missed out through suspension after his red card at Tynecastle.James Collins would have joined Danny Handling and Duncan Watmore on the bench after an abject showing against the Jambos, but a groin strain suffered by Paul Heffernan in the warm-up offered the former Swindon striker a reprieve.Aberdeen boss Derek McInnes, meanwhile, opted against altering his side, despite having the William Hill Scottish Cup semi-final with St Johnstone approaching on Sunday.And his confidence was rewarded when McGinn swept home a brilliant opener from outside the box after 14 minutes.The rampant Pittodrie outfit then struck the same post twice within 120 seconds as they closed out the first period on top.But they had to wait until the 62nd minute for McGinn's emphatic second, when he thundered the ball off the underside of the crossbar before watching it bounce into the net.Easter Road had been used as the venue for the Ramsdens Cup final just 24 hours before Hibs kicked-off against the Dons.Raith Rovers caused a shock by beating Rangers in that match, but for their usual tenants it was worrying to note that the Fifers have won just as many games in Leith this year as Hibs have after knocking Butcher's side out of the Scottish Cup back in February.Just two wins in 2014 had placed the former England skipper under pressure and things only got worse as McGinn swept home the 14th-minute opener.Home defender Michael Nelson got to Mark Reynolds' long ball but only cleared it as far as Ryan Jack, whose cushioned header teed up Northern Irishman McGinn to swivel before bending a delicious strike away from the reach of Ben Gordon as it nestled into the far corner of the keeper's net.The Hibees responded by upping the tempo - yet the closest the came was when Tom Taiwo clipped a lovely ball up to Collins midway through the half, but his strike was blocked well by Dons defender Russell Anderson.McGinn, on the other hand, could have had a second four minutes before the break when he cannoned a left-foot strike off the base of the post.The same upright was then rattled again just moments later by Adam Rooney's cushioned volley after Barry Robson threw over a beautifully-flighted cross from the left.Collins felt he deserved a penalty on the hour mark when Anderson bundled him over as the pair chased a loose ball, but referee Bobby Madden was not in a generous mood.Neither was McGinn prepared to be unforgiving as he then blasted home the second

The former Celtic forward was picked out by Rooney from wide on the right and took one touch before spectacularly careering the ball against the woodwork and into the net.Hibs had not given up hope but could have done with Sam Stanton taking one of two chances which fell his way with quarter of an hour left

The first saw him swipe wildly at a bouncing ball 10 yards out, while he shot wide at the second after burrowing his way through the Dons defence.Aberdeen finished the match toying with the hosts as the Red Army indulged in some cheeky chants of 'ole, ole'

But all Butcher could hear was the boos of the furious Leith faithful as he escaped down the tunnel at full-time.His side now sit just four points above the relegation play-off spot, with fears growing by the week that Hibs could be set to follow the demoted Jambos down to the Championship